A poker hand comprises of Five cards and in most poker games, the highest-ranked hand is the winner. You want to know how to learn poker hands and which poker hands beat which? For beginners especially, it’s always interesting to learn the names of all the hands so you can start to understand how the […]

A poker hand comprises of Five cards and in most poker games, the highest-ranked hand is the winner.

You want to know how to learn poker hands and which poker hands beat which? For beginners especially, it’s always interesting to learn the names of all the hands so you can start to understand how the game ebbs and flows.

As usual, we’ve got you covered.

An ace high straight, all in the same suit. All suits are of equal value in poker.

A five card straight, all in the same suit. If more than 1 player has this hand, the one with the highest value card wins.

Four of a kind

Any four cards of the same value. If more than 1 player has this hand, the one with the highest 5th card, the “kicker”, wins.

Any 5 cards of the same suit, but don’t need to be in sequential order. The highest value card determines the strength of the flush, with an Ace high flush being the strongest.

Any 5 cards in sequential order, but doesn’t need to be in the same suit. Aces can count as either a high or a low card. Our example shows an Ace high straight, which is the strongest. 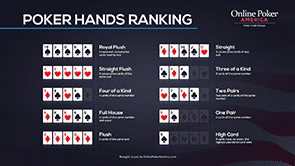 Click below to download the official high-resolution ‘Poker Hands Ranking’ PDF for free which is perfect to have at hand or on your phone while you get to grips with the game. Free Download – Poker Hands Ranking Guidesheet (0.68mb)

Three of a Kind

Any 3 cards of the same value. A set of Aces with a King and Queen as a side card is the strongest possible Three of a Kind.

Any 2 cards of the same value. A pair of Aces with a King, Queen and Jack as side cards is the strongest possible One Pair.

If no one has any of the above, then it’s down to who has the highest single card that determines the winner. Our example shows the strongest possible High Card hand. To clear any confusion, the 0.5% represents the possibility of getting no significant poker hand at all, which defaults to the being ranked by the ‘High Card’.

How many poker hands are there?

There are over 2.5 million possible poker hands to legitimately play.

How many poker hands should I play?

How many poker hands contain exactly one pair?

What is the probability of getting a Royal Flush?

How many poker hands are full houses?

How many poker cards are in a deck?

How much should I bet on poker hands?

Knowing how much to bet is the bread and butter of poker. As always, it depends on the situation but generally if you have a higher ranked hand then it’s safe to bet more. However, if you’re going for a bluff then logic gets thrown to the side.

How many poker hands are possible?