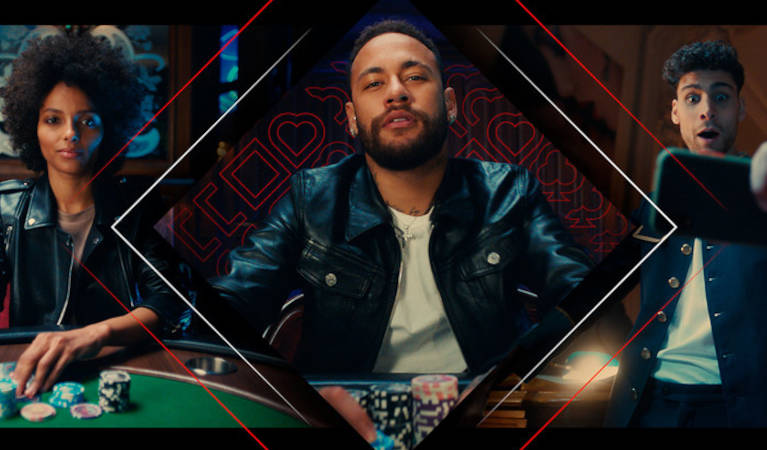 Image credit: PokerStars
Published on April 15, 2021 11:15 am
Author Adam Mason
Share Article
PokerStars has coined a new role for Neymar Jr, appointing the soccer ace to a Cultural Ambassador for the platform The pair will work on a number of “creative projects” details about which will be provided at a later date Neymar and PokerStars have worked together successfully since 2015 minus a few minor hiccups Neymar […]

Neymar Jr and PokerStars continue to build on their successful relationship as Neymar is appointed Cultural Ambassador for the brand.

PokerStars has appointed Neymar Jr to the role of Cultural Ambassador for the brand, following up on a successful, year-long relationship with one of the most recognizable faces on the planet. The role has been coined specifically to accommodate Neymar who will work closely with PokerStars to run a number of “creative projects.”

According to PokerStars Global Director of Brand and Creative, Martin Nieri, the initiative offers the card room an opportunity to bring two worlds together, that competitive soccer and poker.

Citing Neymar Jr’s own passion for poker, Nieri is confident that PokerStars and Neymar are “starting something exciting.” Neymar is not a stranger to PokerStars and he has been working with one of the world’s largest card rooms since 2015 at the very least.

Even though the pair’s relationship has taken a few hits, particularly related to Neymar’s tax issues and him appearing as an underage individual in a marketing campaign in the UK, PokerStars and Neymar Jr. have been going at it together.

Further details about the current evolving nature of the relationship were not immediately available. Neymar Jr. has appeared in various commercials for the platform and openly supported PokerStars on Twitter, and not always as part of any specific role he has held with the company.

Neymar Jr, though, has been a conduit for reaching new, younger demographics with poker traditionally appealing to young and old players alike. Neymar has also released his own music projects which he often dubbed as “the ultimate soundtrack” for poker players. PokerStars similarly launched the “Our Voices” campaign to promote more female poker players involved in the game.

Exploring the full meaning of a Cultural Ambassador will put Neymar in an interesting position for PokerStars. Is the company looking to appeal to younger generations more actively or seek new ways of converting casual fans into players?

The pandemic has driven stronger interest in poker and PokerStars has been able to break grounds in new markets, specifically in Michigan as well as retain its hegemony in Pennsylvania while providing excellent opportunities to local players to benefit from.