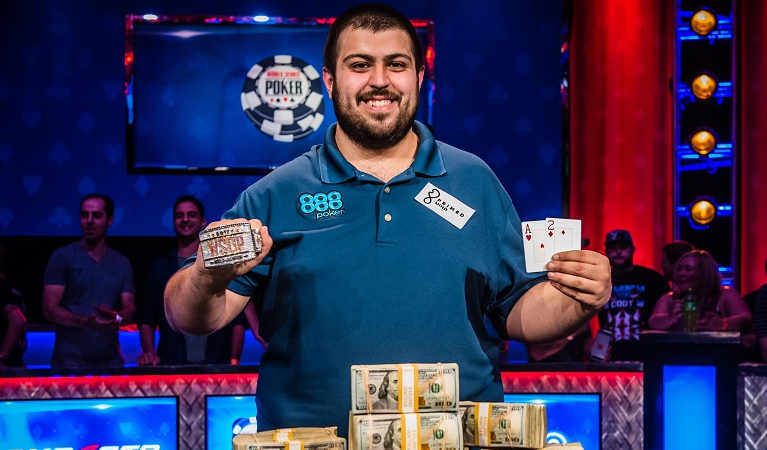 Published on February 5, 2018 8:00 am
Author Adam Mason
Share Article
Just a few months after winning the World Series of Poker Main Event, Scott Blumstein is ready to go again. This time around, it won’t be the poker table. The next step that he plans to do is to actually do some running, in the fitness sense. According to him “the one thing I’m focusing […]

Just a few months after winning the World Series of Poker Main Event, Scott Blumstein is ready to go again. This time around, it won’t be the poker table. The next step that he plans to do is to actually do some running, in the fitness sense.

According to him “the one thing I’m focusing on now is my health”. He also added that “that’s why I’ve been a little bit off the grid. I’m going to be doing some kind of content based around my weight loss. I think that’s kind of where the next step is going to be”.
Regaining his health

Scott Blumstein isn’t just good at poker. In fact, during his high school years, he was able to play on the offensive line for the Morristown High School Colonials during the duration of his junior and senior years. And though weight loss challenges aren’t something new in both social media and poker world, this is something that he plans on focusing on in order to motivate others and to benefit himself. The 25-year-old mentioned that there is no name for the new show or any concrete details yet, however, BLumsteid was kind enough to offer a few ideas of what he plans.

He mentioned that “I am temporarily renting a place down in San Diego, California, with a couple of buddies who all play their role in trying to help me get in shape”. He also added that “every ounce of my energy and strength is going toward that these days. That’s like the main plot of my life going forward. Poker will just be part of that when I can and when I see fit”.

Blumstein has been dealing with weight issues all his life. And for some time on poker, he admits that he slacked off with his health for a bit. But after winning $8.15 million, it gives him an opportunity to focus on his health. He mentioned that “I’ve always been a bigger guy”.

He also added that “The funny part was that a couple of weeks before the Main Event, when I was back home, was the most successful I’d ever been as far as getting healthy and losing weight. And when the Main Event got in the way of that, so afterward it was more party and celebration. I kind of lost sight of what I needed to do”.
Giving himself six months to enjoy the victory, now he is back to work and is more focused on addressing his weight issues.

Blumstein is at the peak of his career today. Many poker plays would want to be in his shoes enjoying a lot of offers and success. In August, he was able to play at the WPT-Choctaw and he mentioned that it was one of his goals to win a WPT title. Later, he played in Florida and Maryland and WPT Five Diamond Classic at the Bellagio by December.

Now that he is focused on weight loss, this only means that poker will not be in front and center, at least for now. But of course, he isn’t done with poker yet.