‘Russians Are Famous For Their Crazy Bluffs’, says Anatoly Filatov

‘Russians Are Famous For Their Crazy Bluffs’, says Anatoly Filatov
Published on July 6, 2016 12:28 pm
Author Adam Mason
Share Article
The Russian poker scene is surrounded by a certain mystery. Although the language barrier keeps many of Russia’s biggest poker stars from breaking out on a larger scale, the Russian players have been thriving on the international poker scene over the last few years. The charismatic Moscow native, Anatoly Filatov, speaks English very well and […]

The Russian poker scene is surrounded by a certain mystery.

Although the language barrier keeps many of Russia’s biggest poker stars from breaking out on a larger scale, the Russian players have been thriving on the international poker scene over the last few years.

The charismatic Moscow native, Anatoly Filatov, speaks English very well and seems to engage in all aspects of the poker game.

He is both the Moscow Wolverines’ Team Manager in the GPL and a consummate grinder at the WSOP.

‘When asked about being an ambassador for the game he said: ‘That’s exactly what I’m trying to do’.

‘I like it. I stream on Twitch, try to answer questions and I’ve participated in several conferences. That’s kind of my role.’

The Spotlight for Filatov

According to Filatov Russians poker players haven’t made the poker top for a simple reason.

‘Russians don’t like to speak English a lot so we’re kind of closed-off sometimes.’

‘In two or three years or maybe five years I think there will be more well known Russian players.’

The Russians certainly know how to win tournaments despite the fact that they don’t like to speak English.

At the WSOP this summer the $3k PLO 6-Max event was taken down by Viatcheslav Ortynskiy and Andrey Zaichenko won the $1.5k 2-7 Triple Draw.

‘I’m hopeful we can win a third bracelet this summer.’

‘It helps to have a close-knit group of players to discuss strategy.’

‘We’re not as close as the German poker community but we usually discuss some things over WhatsApp or conference calls,’ said Filatov. ‘Various hands and strategies.’

‘We have a few different groups.’

Over the course of the inaugural season Filatov’s squad has been one of the most dominant ones. As a Team Manager for the Global Poker Leagues’s Moscow Wolverines he mostly chose Russian players and this underrated strategy at fist seems to pay off now.

‘It was my plan to pick up the guys that I could connect with.’

‘Other teams and players seemed to be quite separate. We’re all together. We eat dinner together and discuss hands. I like that. We all speak the same language too.’

When called upon to play for his team, Filatov showed to be another added value factor for the Wolverines.

‘We’re in first place and I like the experience in the Cube. I really enjoy watching my teammates like Sergey Lebedev and others. We have fun in there.’ 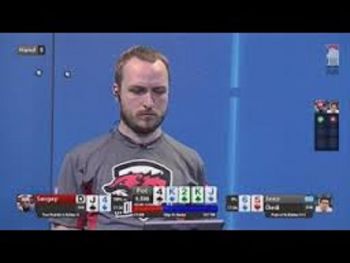 ‘He’s had a lot of success on the EPT and he just finished 7th in the $5k NLHE here at the WSOP. I think he will play the $111k One Drop High Roller too. I definitely think he could win it.’

The international poker circuit has recently been seeing a lot of Russian poker players. Do Russians have poker knowledge that others in the poker universe yet miss out on?

‘It’s kind of different. We’re famous for our crazy bluffs. We’re improving every year though.’

‘Russians play more solid these days because the game has changed and there are less amateurs. We’ve had to change our range.’

Before the WSOP 2016 is complete, Filatov hopes to at least add one more bracelet to his already two other won bracelets.

With only one cash in 16 events, the WSOP has been so mediocre for Filatov himself so far. In the $3k 6-Max event he ended 31st.

It’s however the perfect time to find his form with the $10k Main Event around the corner.