President Obama Carries around a Lucky Poker Chip
Published on February 15, 2016 11:45 am
Author Adam Mason
Share Article
Even though Barack Obama is one of the most influential and powerful men on earth, he revealed that when he feels in need of a helping hand or down on his luck, he searches for comfort by looking to a poker chip. Last week, in an interview with CBS This Morning, the president of the […] 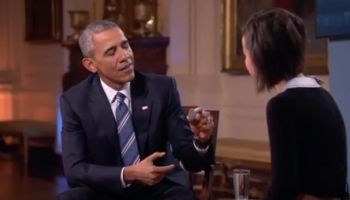 Even though Barack Obama is one of the most influential and powerful men on earth, he revealed that when he feels in need of a helping hand or down on his luck, he searches for comfort by looking to a poker chip.

Last week, in an interview with CBS This Morning, the president of the United States talked about his collection of lucky charms and trinkets people have gifted him. A poker chip is among the charms Obama rotates in his pockets.

It is unknown if Barack Obama is a pro or anti-RAWA (Restoration of America’s Wire Act) advocate, but it is now known that a lucky poker chip is one of his treasured possessions.

The story of how the president got the poker chip is not as exciting as we hoped for.

This chip was not won during a poker game with country leaders such as Germany’s Angela Merkel or Russia’s Putin, even though it would have been an exciting story. Obama actually was gifted the poker chip by a tattooed biker back in 2008, in Iowa.

Even though the president did not earned the chip by playing a poker game, the fact that he sometimes walks around with a lucky poker chip in his pocket, might be a sign that Obama enjoys poker on some level. At least, it is known that the president heard of poker player Daniel Negreanu.

Phil Ivey and Negreanu met Barack Obama, back in 2008, at a fundraiser dinner. At the time Obama even took a moment to regale the players with a poker story of his own. Obama referred to Negreanu as “that poker guy” and told him, that he had lost $60 the night before in a poker game at the White House.

Poker at the White House

There is a long history of poker games being hosted at the White House. The former presidents Harry Truman, Franklin D. Roosevelt, Warren G. Harding and George Washinton were regular poker players.

Even Though many US presidents are known for enjoying playing a round or two of poker, Richard Nixon was the most skilled one.

Nixon reportedly picked up the game in the Navy. During the World War II, in just two months he won $6,000 according to British journalist David Spanier. That would be approximately $87,245 in today’s money if adjusted for inflation.

Obama might not have Nixon’s poker skills, but he has some level of affinity with the game. That a poker chip is one of Obama’s most treasured gifts is another example of the White House’s link with poker.

RAWA might decide to back down, if they could be reminded that the president of the United States actually likes poker.